The meaning and the scope of Environmental Justice are still a topic of debate in the research community. For some, it provides a collective action framework that denounces situations where low income  ethno-racial minorities (Bullard 1990) are overexposed to environmental dangers and disturbances. These situations are exclusively considered through the distributive justice lenses (compensation of health and quality of life damages). According to this interpretation, the Environmental Justice scope remains and must remain limited to the North American socio-racial context in which it emerged and which gives it meaning, as well as to the decisive influence of Civil Rights  (Fol et Pflieger, 2000). For others, on the contrary, the variety of mobilizations that proceed under the banner of Environmental Justice and the variety of justice issues they defend prove that this movement represents a master frame, not only for minorities of color (Taylor, 2000) but also for poor populations, which are predominant in Southern countries and are victims of major environmental damages (overexploitation of resources, destruction of mangroves, water pollution, etc.) (Martinez-Alier, 2008). Some authors refuse to adopt the restrictive definition of environmental justice that prevails in some research and government agencies. Instead, they put forward an integrative understanding of Environmental Justice  (Holifield, 2001) which consequently encompasses several issues :

Based on this debate, what implications can we establish for environmental social sciences? Several lines of reflection can already be developed in order to initiate collective thinking :

The seminars can address these questions through concrete study cases. Meanwhile, their purpose is to test the Environmental Justice framework on a wide variety of environmental fields and issues. They should therefore contribute to developing and bringing attention to French-speaking and European Environmental Justice research and networks and help build cooperative relationships with American researchers who are interested in our approach. Special interest will be given to the training and the integration of PhD and master students who work or wish to work within this framework, or who are interested in discussing it. The seminar program is intended to be flexible and collaborative as it is based on the idea that knowledge is built through discussions. The seminar sessions will, as often as possible, be organized simultaneously in metropolitan France, Reunion Island, Switzerland and across the CRDT network of Quebec Universities from Rimouski, so as to allow Quebec researchers and students to actively participate.

On May 18, 2021, David Schlosberg presented a recent co-authored paper (Celemajer et al., 2021) entitled “Multispecies Justice: Theories, Challenges, and a Research Agenda for Environmental Politics”. David Schlosberg is a political scientist at the University of Sydney and co-director of the Environmental Institute of Sydney. His work on the movements and theories of environmental justice (2007) and more recently on the emergence of a new movement of sustainable materialism is widely recognized (2019). In his presentation, which is discussed by Brendan Coolsaet, David Schlosberg goes over the theoretical influences of multispecies justice, presents the processes for extending recognition to new subjects of justice and the implications for future policies. The seminar is available at:  https://youtu.be/4CHQqnPKah0.

On January 28, 2021, a seminar took place with Dominique Paturel on the concept of Food Democracy. The author, who recently published two books, made an effort to combine her framework with that of Food Justice. She thus contributed more extensively to the Environmental Justice movement. More particularly, she presented the basis of food democracy as a systemic approach, namely the recognition of a right to sustainable food, based on experiments and initiatives undertaken locally and stemming from social justice. In that respect, the author favors a research-action which brings her today to defend the idea of a social security of food. The recording is available at: https://youtu.be/0Dz9fv44t0g.

On November 19, 2020, a reading seminar took place with Lydie Laigle on the book co-authored with Shophie Moreau: Justice environnementale. Les citoyens interpellent le politique. (Environmental justice. Citizens call upon politics.). The author went over the justice theories before delving into environmental citizenship and what this notion encompasses, the way climate justice is perceived in the COPs, the legal and ontological confrontations as well as the unequal relations between groups that influence decisions. 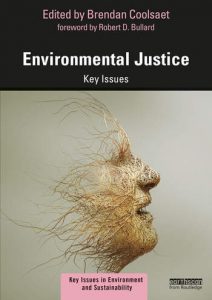 From July 2 to 4, 2019, the 2019 Environmental Justice Conference entlitled “Transformative Connections” was held at the University of East Anglia. B. Coolsaet and V. Deldrève coordinated two sessions on the theme “Exploring ‘francophone’ environmental justice approaches” with the following presentations:

·       “Transformative connections between Francophone and Anglo-American justice approaches: What are their Contributions for the Analysis of Environmental Injustices?”, Laigle Lydie, CSTB – University of Paris-Est.

·       “The death of the rivers in South Indian Deccan context: a French approach of care lacking through a gender analysis”, Hélène Guetat-Bernard et al. – French Institute of Pondicherry (IFP).

On June 7, 2019, the “Justice environnementale et sanitaire au Nord et au Sud. Quels apports heuristiques de l’interdisciplinarité ?” seminar was held (Environmental and health justice in the North and the South. What are the heuristic contributions of interdisciplinarity?). The event was organized by C. Claeys and S. Dos Santos with the LPED-IRD-AMU partnership and took place at the Saint-Charles campus of the University of Aix-Marseille:

From May 22 to 25, 2019, a symposium on territory development took place at the University of Quebec in Rimouski: “Innovation et territoires : vers un renforcement des inégalités ?” (Innovation and territories: toward a reinforcement of inequalities?). The event was organized in partnership with the AISLF, the GRIDEQ, the ISDéT Chair and the Atisée – SSHRC research program, and with the coordination and the participation of N. Lewis on behalf of the EJJE network.

On March 20 and 21, 2019, a symposium on “Spatial and Environmental Justice” and “Environmental Care and Stewardship: Theoretical Dialogues among Schools of Thought” took place at the IFP (coordinated by F. Landry, H. Guétat et al.) in Pondicherry with V. Deldrève and M. Thiann-Bo Morel on behalf of the EJJE network.

On July 6, 2018, a third session was organized at INRAE Nouvelle-Aquitaine Bordeaux with Brendan Coolsaet (a member of the Global Environmental Justice research group of East Anglia and an associate professor at Lille Catholic University). First, he presented the research conducted at the University of East Anglia on environmental justice. Then, he outlined and opened the discussion to his own work: Farming Justice. Rights-based approaches to collective agrobiodiversity conservation.

Should you want to explore this topic further, here are two additional articles to which Brendan Coolsaet contributed:

On February 7, 2018, a second session took place at the Tampon campus of the University of Reunion Island. Its topic was environmental justice and postcolonialism. The speakers were: